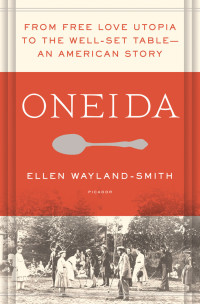 The Larkin Square Author Series welcomes Ellen Wayland-Smith, author of the new book, Oneida: from Free Love Utopia to the Well Set Table- An American Story (Picador/hardcover/May 2016) on Monday, May 2nd from 5:30pm – 6:45 pm. Join us for an author talk, signing and book sale.

Author Ellen Wayland-Smith is one of the many direct descendants of John Humphrey Noyes, who in the early 19th century received visions from God anointing him as a new spiritual prophet. His philosophy was called Perfectionism, a form of Christianity based on self- perfection and communalism. His gospel was one of sexual liberation, communal living, and the perfectibility of human nature here on earth. Along with several followers, Noyes started a community in upstate New York to put his ideas into practice. Scandal,  resulting from the free love movement, surrounded the Oneidas.The members also embodied what we now think of as a maker or DIY community. They canned fruits and vegetables, made traps and chains, straw hats, mop sticks and more. They also made silver knives, forks and spoons which evolved into a joint-stock company, Oneida Limited. It would take the next generation of community members to turn Oneida Limited into the nation’s leading manufacturer of silverware. The Oneida company has roots in the Western New York area operating a large plant in Niagara Falls in the late 1800’s. The company purchased Buffalo China in the 1980’s and still holds the trade name to it.

“We look forward to learning more about the early history of Oneidas and see some parallels with the early success of the Larkin Soap Company in terms of brilliance of marketing and an overlapping customer base of homemakers. There is also a shared history; the Larkin Company started Buffalo Pottery, which became Buffalo China and was ultimately purchased by Oneida.

The book will be available for purchase from Talking Leaves, along with beer, wine and light fare from The Filling Station. The talk is free, including free parking all courtesy of Larkin Square sponsors First Niagara and Independent Health.