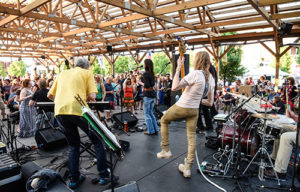 We are pleased to announce the line-up for  Larkin Square’s original flagship event, KeyBank Live at Larkin Wednesday concert series. Attracting thousands each week throughout the summer with a wide range of sounds that showcases the diversity of the local music scene. Plus, of course, a selection of food trucks and beverages to boot. Concerts are from 5:00 PM – 8:30 PM.

Weeks in between include new theme nights Blues 4 Vets, Grateful Dead Cornell ‘77 Revisited, Colored Musicians Club Centennial, Viva Elvis and Music is Art Festival Preview, along with returning favorites Latin at Larkin and South Buffalo Night. The remaining lineup offers the traditional two-band feature; all concerts will conclude with the continued Larkin tradition of a collaboration between bands. Full lineup below.

We’re excited for our sixth season of KeyBank Live at Larkin, which has for us been a perfect way to spend a summer night in Buffalo. While Tuesdays are more a food truck event with live music, Wednesdays are more a live music concert with food trucks. We appreciate the support of KeyBank and Independent Health that allows free admission and parking for all these events.

7/12
Miller & the Other Sinners + Freightrain