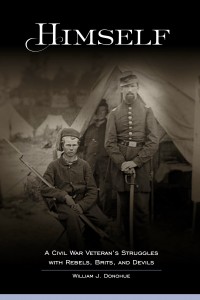 Bill Donahue will present an informal author talk and book signing on Wednesday, April 8th from 5:30pm -6:45pm in the Filling Station Restaurant. As always, the Filling Station will have small plates and drinks available for sale during the talk. Talking Leaves Books will be selling copies of Himself: A Civil War Veteran’s Struggles with Rebels, Brits and Devils, Donohue’s most recent novel set in Buffalo.

Born and raised in South Buffalo, New York, Bill Donohue attended St. Bonaventure University and the University of Louvain, Belgium. He became a Catholic priest in 1964 and served for ten years before leaving the priesthood and marrying in 1974. He was named New York State Commerce Commissioner in 1983 by Governor Mario Cuomo and worked as a community change agent in Flint, Michigan from 1988 to 2000. He and his wife Maryalice have six daughters and nine grandchildren. The story of his great grandfather, Patrick Donohue, parallels in many ways his own ragged route to selfhood.