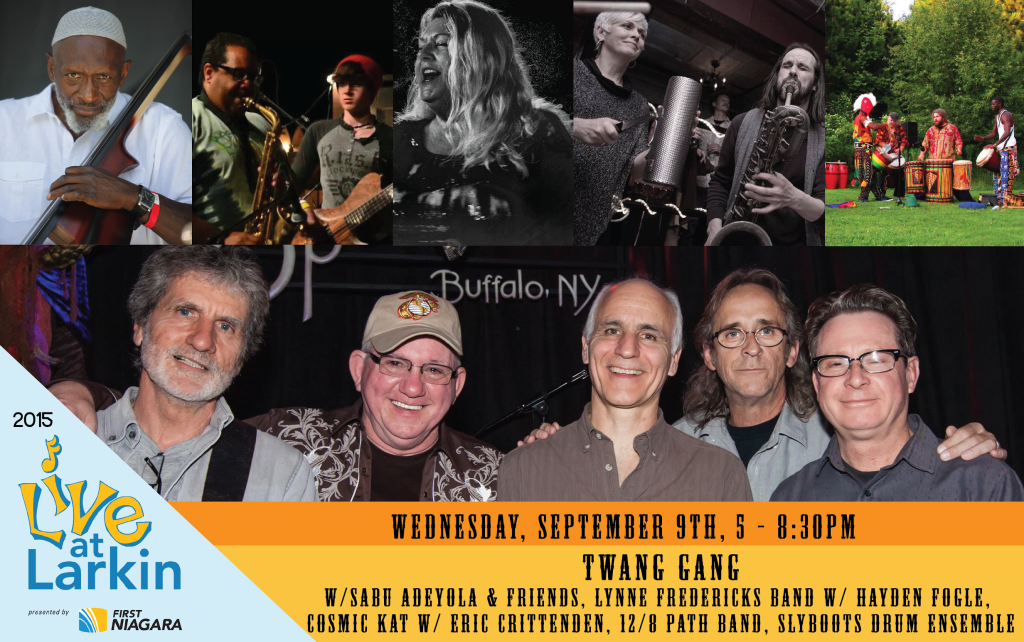 The inspiration from this event came from Sportsmens Tavern owner and musician Dwane Hall – when I offered a spot to one of his bands along with an invitation to use it as a showcase for their recently launched Sportsmens Americana Music Foundation, Dwane, true to his ever-admirable character, responded, “How about we showcase all the local music foundations?”

Moves like that have made Dwane a foundational force in Buffalo’s music scene, in turn serving as evidence that the force is strong in this scene; Buffalo Heritage Night seeks to prove this point with our most ambitious lineup yet, have a look and listen below!

Longtime bassist for the late jazz great Ahmad Jamal, Sabu first played Larkin Square along with drummer Darryl Washington backing the late Boyd Lee Dunlop in 2013; that night, Grammy-winner George Caldwell followed, and on this night George will perform again with Sabu and Darryl, with quite a ringer in visiting saxophonist Bilal Sunni-Ali, best known for his work with the late legend Gil Scott-Heron.

All these spirits and so many more will be summoned in salute of the Colored Musicians Club, the 80-year-old institution on Broadway Ave that stands as the longest continuously operating African-American Musicians Club in the United States. From Billie and Ella to Duke and Dizzy, the list of legends who’ve lounged there is long, and the club is going strong with recent renovations and weekly performances.

The always enthralling 12/8 Path Band is “a brass band movement for reclaiming the powers of music and dance performance for all people, but especially children, in their communities,” led by Steve Baczkowksi, who daylights as music director of Hallwalls, which for more than 40 years has been “dedicated in particular to work by artists which challenges and extends the traditional boundaries of the various art forms” – as evidence that Steve and Hallwalls are a good match, 12/8 Path Band will perform, as always, without microphones or a stage.

Lynne Fredericks’ powerful pipes were the first choice to represent the Blues Society, whose stated mission is “to preserve and support Blues Music through educational endeavors and promotional events.” I added in a youngster who’s sat in on the Larkin Square once already in Hayden Fogle, still in high school but starting to go toe-to-toe with the pros.

No strangers to the Larkin Square stage, the Slyboots crew have been performing not only with us but across the country in community centers and schools for many years “promoting positive social change through cultural arts education,” adding members from West Africa along the way and becoming teaching artists locally for Young Audiences, which for more than 50 years has served ” to make the arts a part of young people’s lives in order to enhance their development as creative and productive human beings.

Already veterans of the Larkin Stage stage as high-schoolers, Cosmic Kat is evolving into more of an adventurous jazz ensemble with one foot in the funk, which plays perfectly into the hands of their mentor and Larkin staple Eric Crittenden, who daylights as a founding staff member of Buffalo Center for Arts and Technology and whose work with Cosmic Kat members includes summer camps with Music is Art (MiA). “Dedicated to exploring and reshaping music’s cultural, social, and educational impact on our community – supported by a variety of programs and events,” MiA’s wild annual festival is set for Delaware Park on Saturday, September 12th, including performances by more than 100 acts, from Cosmic Kat to founder Robby Takac’s Goo Goo Dolls.

The story behind Twang Gang Tuesdays at the Sportsmens Tavern is classic – a regular ringer on both the Sportsmens and Larkin stage, Jim Whitford was on a string of mainly bass gigs when he lamented to fellow Buffalo Music Hall of Famer owner/musician Dwane Hall that he hadn’t played much pedal steel guitar lately. Hall responded that the Sportsmens had Tuesday nights free, and they could start a band built around Whitford on steel and invite people to sit in – they had a list of loyal guests before they even had a band name, which they invited the audience to take care of for them.

5 years later, Tuesdays with The Twang Gang bring big crowds weekly, one of many reasons why “The Honkiest, Tonkiest Beer Joint in Town” is earning a nationwide reputation and has spawned its own Sportsmens Americana Music Foundation, “to foster, promote and expand community appreciation for Americana music from Buffalo and Western New York through the production and sponsorship of performance and broadcast events and presentation of seminars and workshops on Americana music.”

Who knows what’ll happen when The Twang Gang invites members of these opening acts back up for our weekly collaborative encore – gonna be a wild one for sure, join us to see it all Live at Larkin!