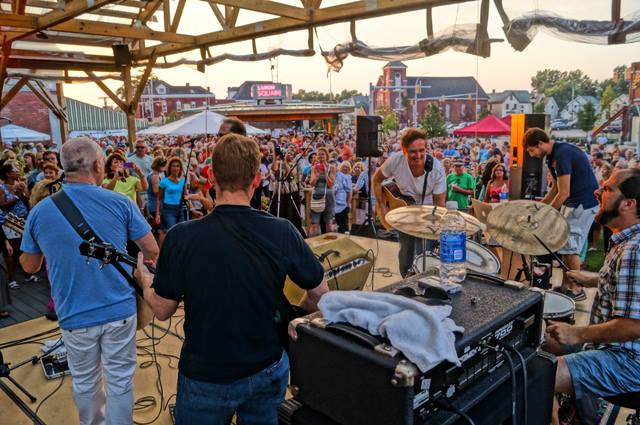 Batten down the hatches and bolster the beer stations, it’s time for South Buffalo Night in Larkin Square!

We’re excited to present again what’s been our biggest Live at Larkin in each of our first three seasons, as we celebrate the nearby People’s Republic of South Buffalo, that iconic corner of our city that has produced more than its share of colorful characters – including our congressman, Brian Higgins, who keeps his local office in the Larkin at Exchange Building and has built a band of ringers with whom he’ll perform for this special occasion.

About that Exchange Street Band – when this was first proposed in our inaugural year of 2012, I figured it would be good, lighthearted fun to have Congressman Higgins up for a few songs in between more established South Buffalo musicians. At that time, he was already known at the venerable Sportsmens Tavern as a folkie with a flair for singing a Bob Dylan song or two – I wasn’t sure how well that would jive at Live at Larkin with its high-energy social scene as opposed to the Sportsmens’ more intimate listening crowd, but of course I was game to find out.

I should’ve expected that Congressman Higgins knows how to seize a big stage – he assembled a serious ensemble that can handle any stage in town, featuring Joe O’Donnell (vocals, guitar), Kevin Corbett (guitar, keyboards), Terrance Bruce (saxophone), Chuck Eaton (bass), and Larry Rizzuto (drums), and by the time they closed their inaugural season set with The Who’s walloping “Won’t Get Fooled Again,” it was clear that they belonged in the headlining slot.

We’ve still featured many more renowned South Buffalo bands over the years – this year, we’ll welcome a few familiar faces among the South Buffalo All-Stars, a supergroup including Willie Schoellkopf, Billy McEwen, Jim Brucato, Joe Head and more. Live at O’Larkin favorites Crikwater will bring back their Celtic folk for their summertime debut – and they’ll stay in the neighborhood afterward to play another set across the street in the Hydraulic Hearth beer garden once the square winds down. And finally, opening the proceedings again will be Congressman Higgins’ son John, who’s wowed us with his wonderful voice each year and has recently moved to Nashville to pursue a music career – this will be his first homecoming performance since his big move!

Perhaps you’re thinking, “Enough about the music – just promise you won’t run out of beer again.” Deal! Not only will we have Seneca Street closed and extra serving stations alongside it, but we now have Flying Bison’s brewery right down the street here in Larkinville and ready to reload us if needed! Add a fleet of food trucks and a host of South Buffalo vendors in our marketplace and we have the goods for another great South Buffalo Night – join us to see it all Live at Larkin!